London is a city that feels like it has the whole world inside of it. It is exuberant, bubbling and vibrant. On every street corner there is a pub selling sausages and mash, or fish and chips. Every suburb has its own story and vibe. Every museum teaches you something new and different.

You would need about a month to be able to see everything you wanted in London, and then you still wouldn’t have seen it all. I had six days in London and got around to all the suburbs I wanted to see, but missed out on a lot of museums and walking tours or activities I would have liked to do. I just accepted that I wasn’t going to see everything in one of the biggest and culturally diverse cities in the world, and that now I have a reason to return!

NOTE: I have only included the things I was able to see and do during my first time to London, because I like to give honest recounts of what I recommend in a city and not just blindly list sites or activities I’ve seen online.

Big Ben is the nickname for the Great Bell of the clock at the north end of the Palace of Westminster. This is currently being renovated and won’t be finished until 2021, so be prepared to be disappointed when you see him completely covered in scaffolding.

This is a royal church in the centre of London offering daily services for all and a World Heritage Site with over a thousand years of history. I didn’t go inside, as I chose to walk around outside snapping some photographs and seeing how large the building is.

My favourite bridge in London! It is a beautiful, large bridge with fairy-tale like towers on either end. It was built between 1886 and 1894. You can also walk across it, but walking along the River Thames will get you the best views of the tower for a photograph.

This is the residence and headquarters of the monarch of the UK (aka where the Queen lives). Get here before 11am to see the changing of the guards. Also be prepared for hundreds of people to be here no matter what time you come. I got there after 11am and there was only one guard with the funny hat standing there, but he did some marching around which was enjoyable to watch. Unfortunately, the queen didn’t come out to greet me.

Piccadilly Circus is a public square, particularly known for its video display and neon signs mounted on the corner building on the northern side. It also happened to be inundated with anti-trump protestors the day I went so I could barely see the square. 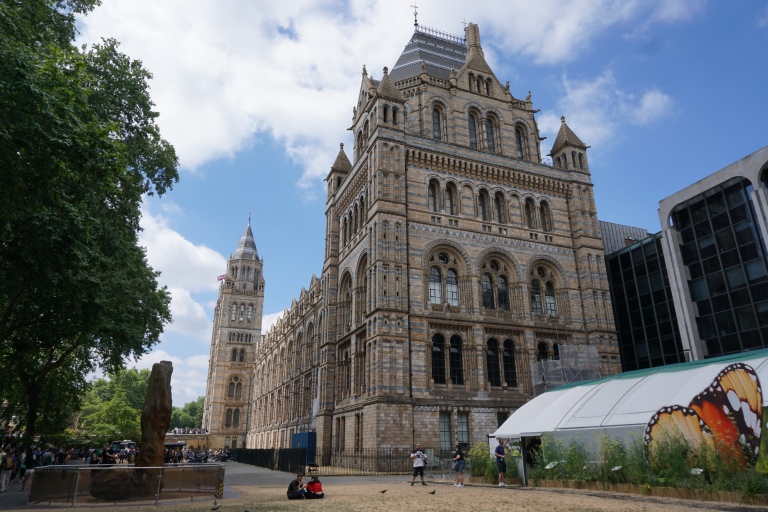 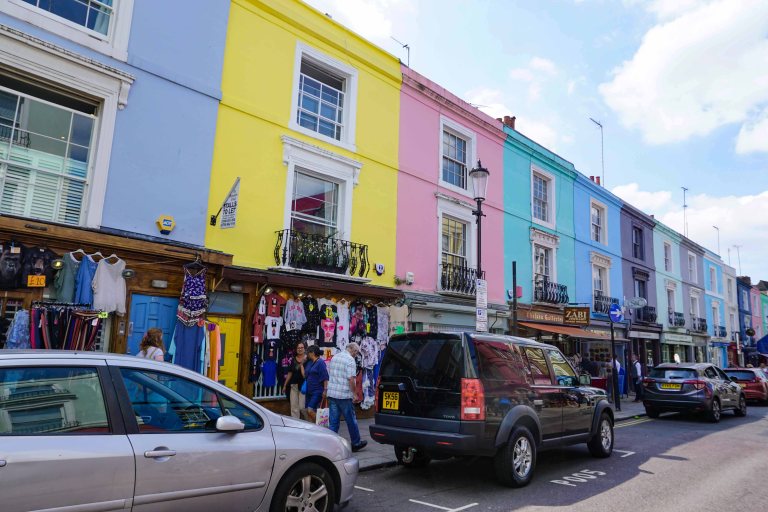 This square is home to the National Gallery and an impressively tall statue known as Nelson’s Column. It is also a nice square to sit in and watch the world pass you by, and catch an intriguing street performer or two.

This is the biggest park in London, so if you are in need of some R&R during your busy time in London come spend a few hours here. They also hold events and concerts quite often.

This is a cute market near London Tower, filled with tasty treats from all over the world! You can find pastries, bread, kebabs, Thai food- you name it, and it’s there. 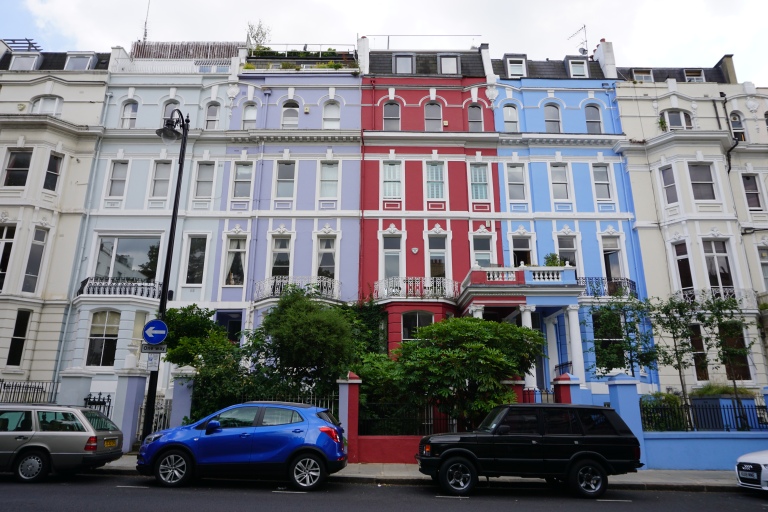 Carnaby shopping, located in the centre of London’s West End, is made up of 14 streets combining over 100 boutique, trendy shops with 60 delicious places to eat and drink. I really enjoyed wandering around this area perusing through the unique shops and looking at the buildings.

This is the most popular shopping strip in London, located near Hyde Park. No matter what time you visit it will probably be bustling with people, so be careful of your belongings and yourself! It is home to all the major shopping brands such as Topshop, Mango and Selfridges.

Selfridges is a Grade II listed department store located on Oxford Street in London. It was designed by Daniel Burnham for Harry Gordon Selfridge, and opened in 1909. The clothes were ridiculously expensive so I didn’t buy anything, but enjoyed walking around the department store for 30 minutes just to see it.

Harrods is a luxury department store located on Brompton Road in Knightsbridge, London. It doesn’t stock items that the average joe can afford, but it might be fun to walk around to see how the 1% shop. The store occupies 20,000 m2 of land and has 330 departments covering 102,193.344 m2 of retail space- that’s ought to fill in some time while escaping London’s heatwave with some air con or London’s freezing or raining temps the rest of the year.

One of the best things about London are the free museums! When visiting a city the cost of going to museums really does add up, so this was a treat for my London budget since 1£ equalled $2AUD.

The Victoria and Albert Museum is the world’s largest museum of decorative arts and design, housing a permanent collection of over 2.3 million objects. It is a huge museum so you can’t possibly get through everything, and it is best to pick and choose what interests you most and spend 2-3 hours maximum here.

The museum hosts exhibits in botany, entomology, mineralogy, palaeontology and zoology. The museum had information on animals from all over the world, that had been extinct, endangered and still living. By this point in time I had become extremely homesick so I was looking for all the Australian marsupials, and luckily enough there was information on most of them!

This museum was founded in 1824, and it houses a collection of over 2,300 paintings dating from the mid-13th century to 1900. It is located in Trafalgar Square. 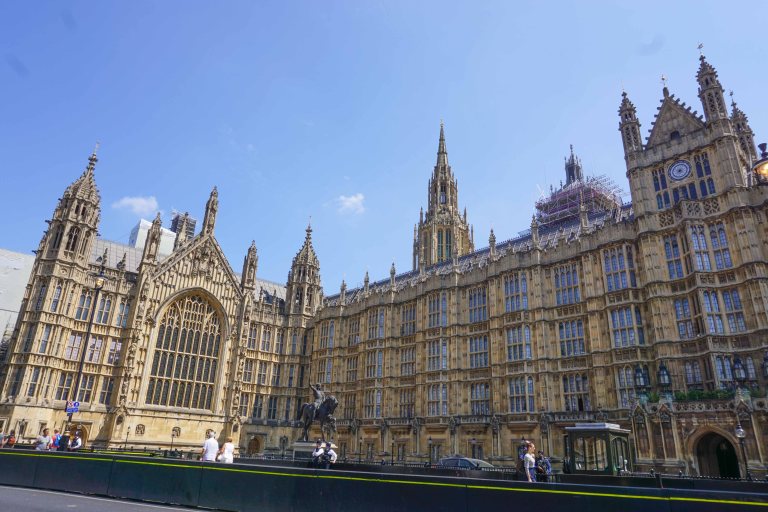 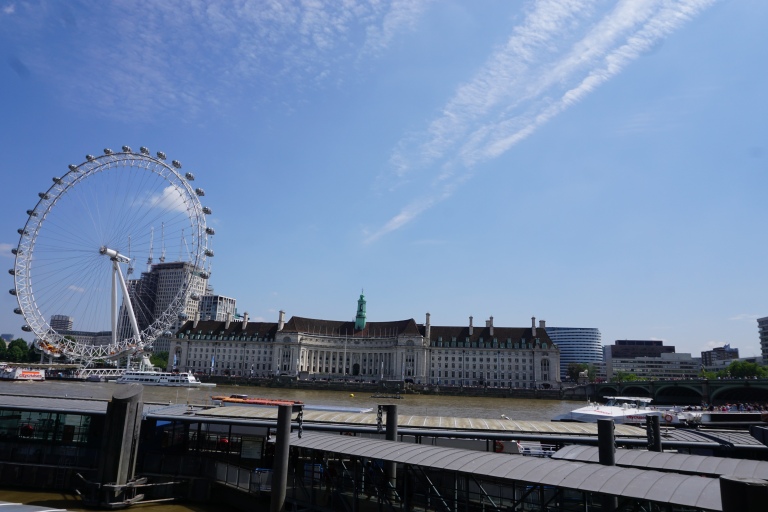 Outside of the main suburb of London, Westminster, which hosts all the main tourist attractions such as Big Ben, Westminster Abbey and the London Eye, there are so many cool, bustling suburbs to visit in London. If you’ve got a few days to a week in London I suggest getting around to at least a few to get the real vibe of London and not just see the tourist icons.

So I’m sure you’ve heard of the movie that was named after this suburb unless you’ve been living under a rock for the past 19 years. It’s hard to pick a favourite suburb, having only been to London once and visiting each area for only a few hours, but I loved the feeling Notting Hill had. It was filled with beautiful, coloured houses lining the streets that wove into streets filled with all white houses. The largest antique market in the world, Portobello Market, is also located in this area and the most beautiful pub, Churchill Arms, I’ve ever seen!

This was a cool, arty area filled with young creatives. There are many hip clubs and bars surrounding High Street and Old Street, along with graffiti filled streets, artisan coffee shops and noodle bars. I found this area a little grungy, in all the best ways. 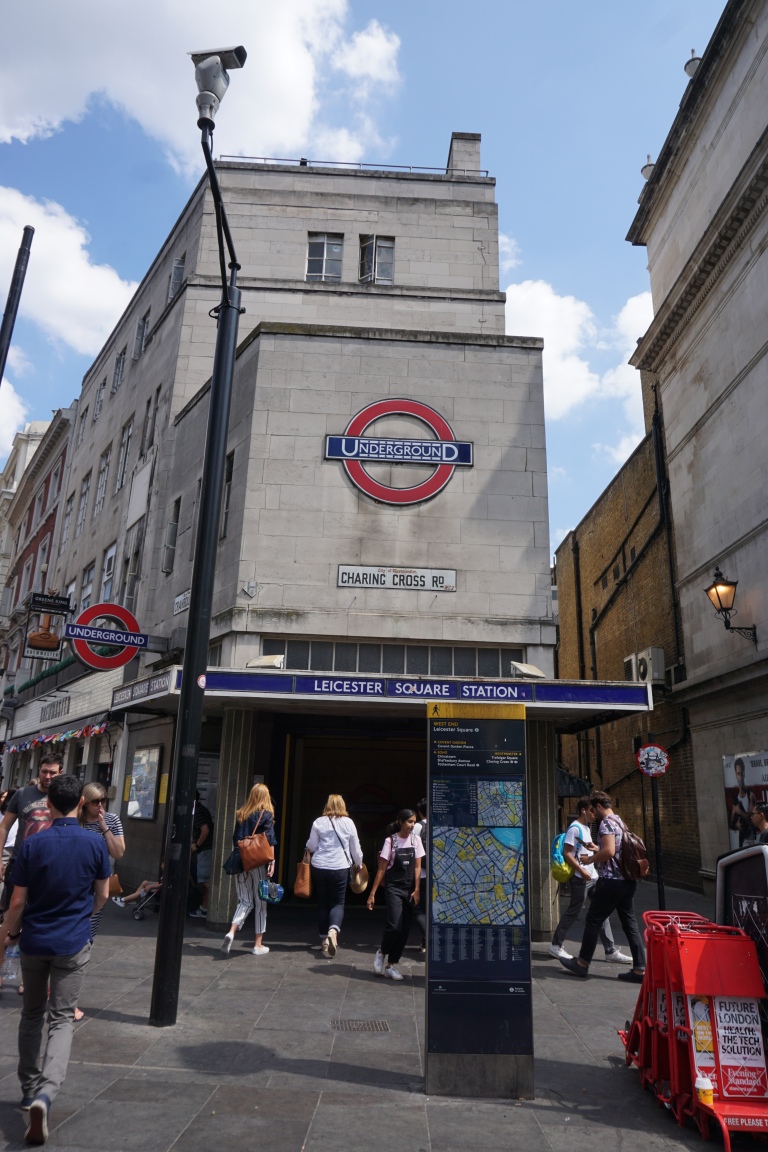 This area is right near Trafalgar Square, filled with restaurants, musicians busking and boutique stores. My favourite area around here is called “Neil’s Yard”, which can be found by finding the Neil’s Yard Remedies store. It is a small, quirky square with benches around trees, eccentric, colourful painting on the buildings and a few restaurants.

I went here on a Saturday and it was one of the busiest places I went to in London. There is a huge market filled with food stalls from all over the world, thrift clothing and accessory stores, and knick-knacks and souvenirs. I thought this was a really groovy area, but I would suggest trying to avoid visiting on the weekend. It was a little too busy to be able to fully enjoy the creativity of the whole market.

Greenwich is what I think of when I think of a typical British suburb; red brick houses all joined together, with windows that jut out, restaurant shops selling ‘fish & chips’, small, boutique stores for the locals to shop at and a park nearby for the children and dogs to play. Greenwich market is on everyday, 10am-5:30pm which had stalls with delicious food from all over the world. The Cutty Sark is also a popular attraction in Greenwich, which is a British clipper ship.

I got to Greenwich by the water bus from the dock at Westminster on an overcast and cold morning. This was an enjoyable experience, as the boat boasted great views along the river out to London, and went under Tower and London Bridge. However, it was very expensive- costing 6.50£ each way!

Primrose Hill is a cute suburb in London, lined with cafes and a park with impressive views over the city. There isn’t too much to do here, but it’s a nice way to spend an afternoon either eating a scone with jam in one of the cafes or bringing a picnic and beers to sit on the hill with some friends.

Kensington is an upscale area home to some of the most popular museums in London, the Natural History Museum and the Science Museum. The Kensington Palace is also located here, and if you’re wanting to do some shopping check out Kensington High Street and Church Street.

I was wildly curios about Brixton, having grown up listening to the Clash’s song ‘The Guns of Brixton’ and just had to suss out what Brixton had to offer. I checked out the first street in London to receive electricity, Electric Avenue and ate at one of the street-food restaurants in Brixton Market. I only visited in the morning, but I am told the city comes alive at night at Pop Brixton for bevs and the O2 Academy Brixton for gigs. 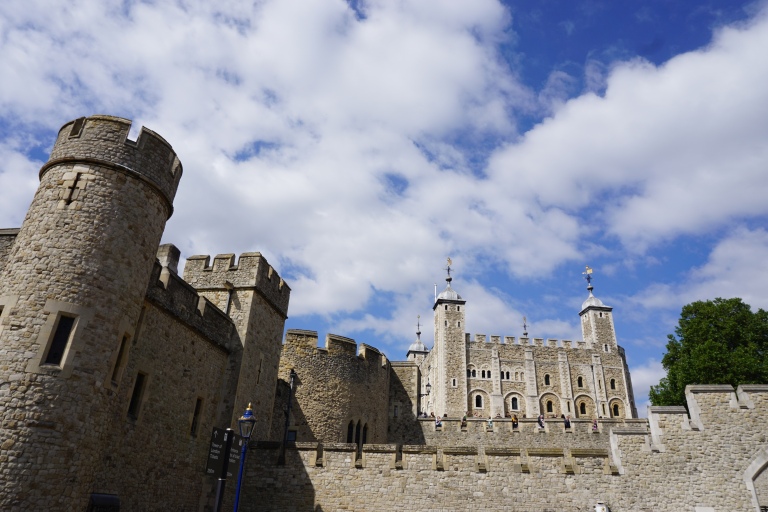 For the first two nights in London I stayed at the hostel/pub The Horse & Stables. The location was great, right in Westminster and close to the main tourist destinations for only $31AUD a night, but I was happy to stay at my friend’s house for the remaining 4 nights as the beds weren’t great and sharing a room with 9 other strangers wasn’t all that fun. 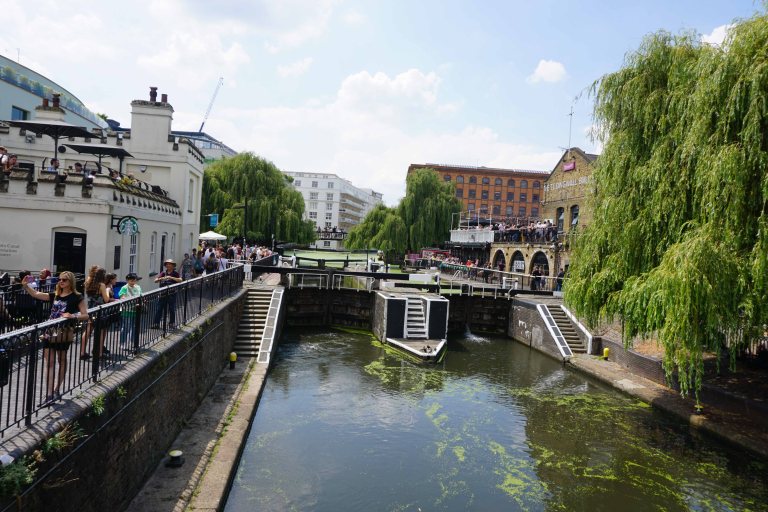 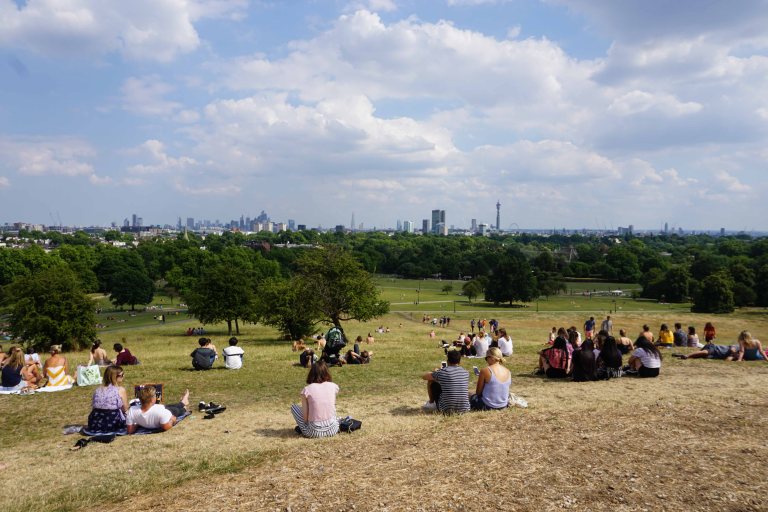 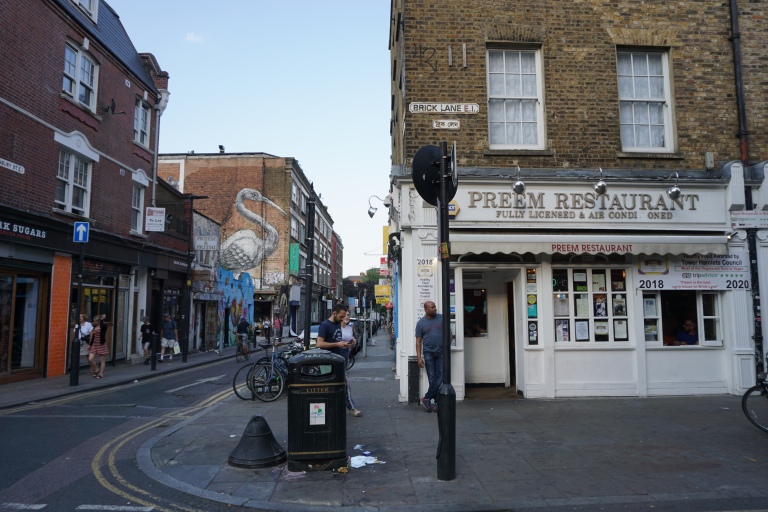 One Reply to “Top Things to do in London”